Water that is taken in must be treated before it is used in the process, and it is again treated after the process before it is released as effluent to a recipient. The substances in the effluent after wastewater treatment are reported. All mills have some sort of effluent water treatment, either mechanical treatment by sedimentation or in addition biological anaerobic and aerobic or chemical treatment of the effluent. A few mills send their effluent water to an external communal treatment plant. The volume of effluent water is reported separately for treated process water and thermally polluted effluent (e.g. cooling water). All mills have reported the figures for outgoing effluent water to the recipient i.e. effluent water after final treatment. The amount
of substances (COD, BOD, suspended solids) per m3 of effluent from the different mills show very little variation when the efficiency of the waste water treatment station is the same. The amount of substances per tonne paper production may however vary according to the amount of effluent, depending on specific circumstances in the paper production process in the different mills. In the questionnaire for data collection, a number of other emissions were asked for such as oils, nitrates, acids, AOX, chlorate, chlorides, borates, phenol, Hg, Pb etc. Few mills were able to report figures, probably because there are no or few measurements. Only COD, BOD5, suspended solids, total nitrogen and total phosphorus are based on data from most mills in addition to the total volume of effluent waters. Due to the water treatment it is possible that the content of certain substances per m3 is higher if the water is taken from a river than in the effluent released into the river. In an LCA this would mean that the production of paper could be credited for the reduction in substances, although in practice this rarely happens. This principle is illustrated in Figure 13. 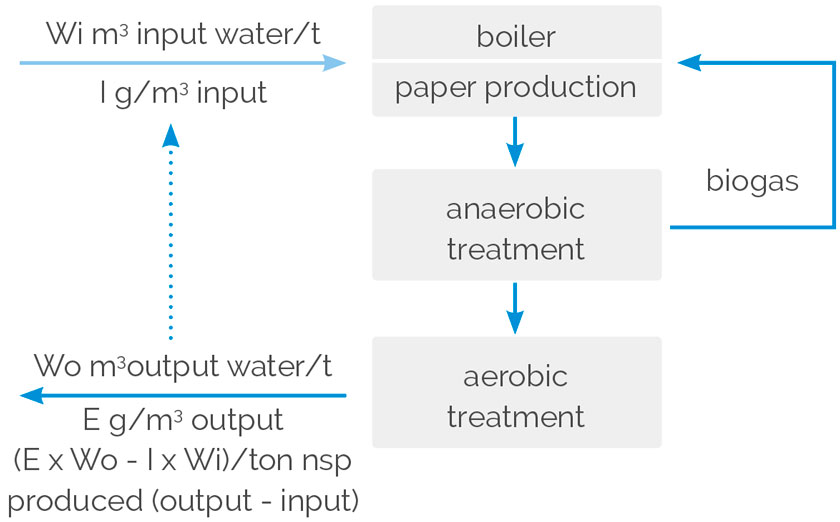 Since only a few mills analyse their incoming water the available data cannot be considered as representative. Therefore, only data for the emissions to the recipient are given, without taking into account the substances in the incoming water.

Most of the corrugated board plants have internal wastewater treatment that can be treated externally afterwards.

In case the wastewater is not further treated externally and released to the environment, the emission level of substances is so low that reporting them is not required by authorities. The reported data are therefore based on a small sample.

Besides the substances reported in chapter 4 and the Annex, very few plants have also given data on some of the following emissions: metals (Cadmium, Chromium, Lead, Nickel, Iron, Boron, Aluminium), AOX, Chlorine and Phosphorus. The amounts are below 0.001 kg/tonne nsp.

As far as waterborne emissions per m3 are measured for a mill, these data are well documented. The figures reported are usually based on continuous measurements according to control programmes set by official authorities. Given emissions to water are measured according to standard methodology. Where necessary, allocation between paper grades is done according to mass of produced paper grade. The water used for
the production of White Top Testliner is relatively higher than for Brown Testliner and Recycled Fluting. No separate data are reported as the effluent from its production is mixed with that from the production of other grades produced on site. Data on emissions to water from the corrugated plants were also collected. However, the corrugated plants are not subject to Industrial Emissions legislation, and therefore the quantity and quality of available data is inconsistent. This is further complicated by the fact that the corrugated plants do not all have their own effluent treatment facilities or treat only certain aspects of the wastewater associated with specific processes (for example, ink recovery). Many plants discharge a proportion of their wastewater under specific agreement to public effluent treatment facilities and therefore do not have access to data on the releases to the environment (after final treatment). It did not prove possible to make a reliable analysis with the data collected during the latest survey. For this reason, data representative of emissions after a public waste water treatment plant should be considered for the waste emissions from the corrugated plant.